The story of Gyllene Tider becomes a motion picture. 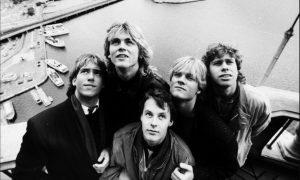 Nordic drama production company Nevis Productions has secured a deal with Sweden’s national treasure, Gyllene Tider to make a theatrical movie and a TV-series based on the band’s incredible rise to fame and success.

In 1978, Per Gessle and Mats Persson formed Gyllene Tider with Micke Andersson, Anders Herrlin and Göran Fritzon. Having conquered Sweden, Gyllene Tider broke up in 1984. Frontman Per Gessle went on to form Roxette with singer Marie Fredriksson and took on the world.

The warm, feel-good movie – which is being developed in full collaboration with the band – will tell the inspiring story of how five teenagers captured the heart of the Swedish nation. Acclaimed Swedish scriptwriter Pernilla Oljelund (“Miss Friman’s War”, “Wallander”, “The Restaurant”) will pen Nevis’ first feature film which will start shooting in 2022. Nevis principals Anni Faurbye Fernandez, Moa Westeson and Cindy Hanson will produce.

The biopic charts the story of Per, a small-town, ambitious misfit who dreams of pop stardom and finds a brotherhood through music with MP, Micke, Anders and Göran. Defying ridicule and rejection, the band works hard and relentlessly to achieve success. The band quickly shot to fame with its power pop, catchy choruses and lyrics about life in a small, southern town. Gyllene Tider is a story about dreaming big and making it bigger, and then the highs and lows of experiencing the impossible: overnight stardom and fan hysteria, which neither the teenagers nor their families are prepared for.

In this coming-of-age story, success brings joy and fun, but also pressure, conflicts and tragic events that challenge the band and force them to grow up in the spotlight. Ultimately, it is their friendship and music that carries them through, up to the incredible last chapter, when the group not only survives but becomes bigger than ever.

In the following years, a number of Gyllene Tider reunions and tours took place. When Gyllene Tider celebrated its 25th anniversary with its first new album in 20 years, their GT25 tour in 2004 became the biggest tour in Scandinavia ever and the third largest in Europe. More records and tours followed, and by retaining their popularity for over 40 years, Gyllene Tider has earned legendary status in Sweden.

Per Gessle says: “The story of the guys in Gyllene Tider could be the story of any young small town person. The shaky possibilities after finishing school, the uncertain prospects of the future. However, inspired by the new wave and power pop scene of the era, bonding in our tiny rehearsal shack, we found a very unusual way to grow up. The early and crazy Gyllene Tider years changed our lives forever. And it seems we might have changed some other people’s lives as well along the way. The lads and I are all excited to be part of this production.”

Moa Westeson at Nevis adds: “We have long dreamed of dramatising the exceptional, inspirational story behind legendary Swedish pop band Gyllene Tider and are excited to bring the audience along on this fun, uplifting whirlwind celebration of music, friendship and coming of age that captures the zeitgeist of a bygone era.”