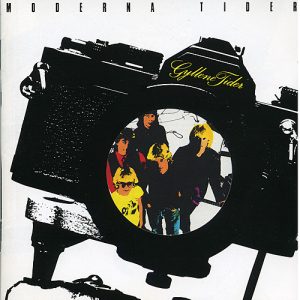 Moderna Tider was Gyllene Tider’s “sophomore album,” IE album #2. Very hard to follow up and the previous album, Gyllene Tider, had been a huge success.
Moderna Tider had advance orders of more than 130.000 copies and is one of Gyllene Tider’s most sold albums ever. The album had sold 304,680 copies by December 31, 1982.
The original title was Självutlösning (Self Ejaculation) a pun, that stayed in line with the camera on the sleeve. The name was changed in the 11th hour to Moderna Tider (Modern Times) after the Charlie Chaplin movie. 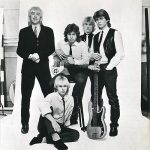 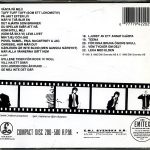 Per Gessle, 1981:
We had help from Niklas Strömstedt doing backing vocals on “Vänta på mej” and “Kärleken är inte blind (men ganska närsynt)” and Marie at the switchboard on “Min tjej och jag”. But on the rest of the songs there is only Gyllene all over on vocals, music and the arrangement side. From saltshakers to clapping hands…

The recording was done in EMI Studio 1 and 2 in Stockholm, partly in August and September 1980 and partly in January 1981. Producer and a steady firm hand was of course Lasse “Just Wait-Till-I-Have-a-Hit!” Lindbom. Recorder, technical oracle and never sleeping servant was the always eminent Björn “Puppe” Boström. Supervisor and coordinator, curator and critic as well as Bondegatan’s knight was the always alert Kjell “My-Phone’s-Out-of-Order” Andersson who also made the design and cover layout.

The mixing was, by the way, made in EMI-2 by Lasse, Björne, Mats and Per.

And… besides the above mentioned gentlemen we would like to give our most kind thanks to the whole EMI staff with Mr. Rolf “Dollar” Nygren up front, The Showringen People with Thomas “It’s-Like-the-’60s” Nordlund in the front and our Janne “Make-a-Hit!” Beime who has dabbled with most things… We won’t forget, by golly, Dieke Music and Steiner Music, which were there for us.

We thank Lasse Lindbom Band for numerous jams (remember Village, boys?) Mr Lundell for an unforgettable jam in Halmstad during the Ripp Rapp-tour just before Christmas ’79 (Tipp Tapp), Calle Bengtsson (of course) who shot the most and the best. Mats Rödholm on Big Pic we would like to thank for pictures and spirits… Also Ernst for guitar paint and 2Tone. Tony and Anders were good at selling albums. Thanks to Gunilla Loneberg for opening letters. Send letters and alms, folks…

Oh, we almost forgot, thanks to Charisma Music Production in Halmstad, that means Peppi, because we could use “Billy” (on our previous album) and now “När alla vännerna gått hem.” Cake for Christmas, Peppi…

When we were on tour in 1980 we took help from the following jolly fellows which really should be called attention to: Magnus “Doggy” Herrlin, Svante “Autograph” Stenberg, Fippe “KK” Åberg, Lasse “I’m-Drunk-Again” Bengtsson, Thomas “Clayderman” Giebner and Hasse “Too Bad” Fredriksson. Thanks boys, you have made the impossible possible! Maybe we also should thank the girls on TV 2 (it was, after all, thanks to you), and since we mentioned profit: What would you have been without the publisher Inhouse Music? Answer: Richer…

And last, but not least we would like to thank our fans for an incredible year. And especially we of course thank all the girls… Agree with me that Rockslaget in Karlshamn is some of the best things that have happened in Swedish music life during the last years. Keep up the work! And thanks John Lennon who showed us the way and who gets this album’s dedication. I who write all this hopeless information am sometimes called Per and I’m soon 13…

Per Gessle, 2000:
One of the reasons for our success is of course our record company, EMI. Already from the start we developed an extraordinary good contact with everybody that worked there. Roffe, Benke, Bremar, Leffe, Ahlkvist, switchboard Marie, Britt, Sven-Åke, Kjelle of course etc. It felt like everyone worked a little extra for Gyllene Tider, why I don’t know.

Exactly one year after we had gone into Studio 2 and started with our first LP, we started the recording of the second: “Moderna Tider” we are talking about August 1980. We recorded five songs in order to try to make a single before Christmas: “Vänta på mej”, “Kärleken är inte blind (men ganska närsynt)”, “När vi två blir en”, “När alla vännerna gått hem” and “Chrissie, hur mår du?”. But before we got that far you should know that we threw away almost an entire LP, which Kjelle thought was the worst he had ever heard. Among the titles “Cilla 16, söt som socker! [Cilla 16, sweet as sugar!]”, “Gå hem innan du lägger dej [Go Home Before You Go To Bed]”, “Min tjej läser Playgirl [My Girlfriend Reads Playgirl]”, “Nu går det av bara farten [Now It Comes and Keeps On Coming]” along with the legendary “Henry, dansa inte disco! [Henry, Don’t Dance Disco!]”. He was probably right. Though it took a lot of self-confidence and it demanded much sweat from the band to start from scratch again.

Anyhow, “När vi två blir en” was released during the fall and became gigantic! Number one for 16 weeks and almost 100,000 sold singles. Tagging along, our first LP went up the charts again, after all it was the only one available in the stores, “Moderna Tider” was scheduled for release in March ’81.

I happily remember an EMI dinner at Operakällaren, when Rolf Nygren (the Boss… he thinks) stood up and said: “Cheers for ‘Moderna Tider’ which has been preordered in 130,000 copies!” We had guessed 30,000! That was the first time we realized how big everything had become. A strange feeling.

There existed many ideas about “Moderna Tider”. The cover with the came from originally naming the album “Självutlösning [Self Ejaculation]” (thank god we changed that in the last minute…) And of course we took the back sleeve pictures ourselves. Another idea was to record an EP, which should be included with “Moderna Tider” free, with four translated favorites we’d always been inspired by. We chose “Golden Age of Rock’n’Roll” (Mott the Hoople), “I Need to Know” (Tom Petty), “Girl Don’t Tell Me” (The Beach Boys) and “And Your Bird Can Sing” (The Beatles). We got Pugh Rogefeldt to read the opening statement to “Golden Age…” (by the way, we played his “Dinga linga Lena” live) and Hasse Breitholtz (record company mogul nowadays) played the piano-intro and we called the EP “Swing & Sweet”. Naturally this bonus recording made the pre-orders for “Moderna Tider” reach sky high. It was just included on the first edition… surely everyone loves the recording business…

1981. I think of the hysteric, and I mean H-Y-S-T-E-R-I-C, spring tour. People were carried out like flies from the concerts, we ran the gauntlets and were locked up in boring Esso motor hotels because the whole lobby, restaurant and the whole surroundings were overfilled with Gyllene Tider-fans, we played Himmelstalundshallen in Norrköping and beat Lundell’s old attendance record and had police escort when we left (cool!), we won Expressen’s (or was it Aftonbladet’s?) [Aftonbladet’s //ed.] reader contest against Noice about beeing the most popular band in Sweden (we played the shirts off them in Hagfors as if that wasn’t enough…,) I got 2,000 birthday cards when I turned 22 and it was Walpurgis night in Kristianopel, Blekinge and 3 persons died in the crowd before the gates opened.

It was our first performance of our park tour and the organizers had expected 1,500 people, 6,000 showed up, it was really cold and everyone waited until the very last minute before entering the park, which of course meant chaos. Incredibly tragic! We went slowly home to Halmstad and some of us cried in the bus…

“Moderna Tider” was finished in January 1981 and some of the tracks which didn’t make it onto the album were released as a fan club single in 5,000 numbered copies. It included, besides some small talk by Halmstad’s most handsome pop-quintet, also our version of “För dina bruna ögons skull” (which we wrote for Lasse Lindbom for the Eurovision Song Contest 1980… It came last!) and “Vem tycker om dej?”. “Leka med elden” was a ballad, which was the flip side of the “Leva livet” single.

“Ljudet av ett annat hjärta” and “Teena” were on our fall single which was released with our not-Oscar-awarded movie “Parkliv.” “Ljudet…” went to more than gold on preorders and the “Moderna Tider” LP didn’t stop before it had reached 390.000 sold copies and we didn’t understand a thing. We were tired after all the recordings and tours and all the crush barriers and went on vacation and played pop stars in America instead (with dubious results…)

Anders was elected Sweden’s most good looking guy
I barely steered clear of two false paternity accusations
We received a telex from Tom Petty’s manager, he wrote that that Tom Petty liked our version of “I Need to Know”. True story!