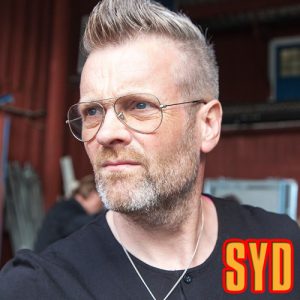 The man, the myth, the nickname… (Jan) Michael Andersson, who was born on March 12th, 1961 in Harplinge, began playing the organ at the age of ten, but switched to the drums not too long afterwards. Rumor has it that he’s also a frustrated guitarist (see Parkliv, the movie…). He has been extremely active in the music business after Gyllene Tider’s breakup in 1985, and has worked with MaMas Barn, Nicke Strömstedt, QBTQ (Adam Alsing’s former house band), Gyllene Style with Christer Sandelin and the Lonely Boys (among many others!). He had a hell of a time during Gyllene’s “Återtåget ’96!” tour, and has studied Eastern medicine. Released a solo single in 1997 – “In the Summertime”, and another in 2006. Micke is married to Helena, (he proposed to her on stage during “GT25”) and they have four children (Two each).

Lately he spends most of his time on the road being half of the duo Syd & Ekman.

Sang the first version of “Tylö sun” that was released on the compilation cassette “Radio Parlophone.”
Micke also sang “Min tjej och jag” on “Moderna Tider”, the two songs were to be combined and released as a Ringo-style single, but the idea was dropped and Micke got banned from singing for about 20 years!
Big Mike was also to sing the song “Harplinge” (Micke is from Harplinge,) but he was sick so he couldn’t. He says “Hallå hallå hallå hallå” in the beginning though.
Why was Micke wearing a military style knitted cap during the 1981 tour? His perm turned out really bad!
Micke’s mom is a hair dresser. She did Per’s hair too.
It’s Micke’s phone number Per says in “Parkliv” and even though it was bleeped out many fans lipread the number and started calling like crazy!
Micke works as a DJ occasionally and is… a leftie!