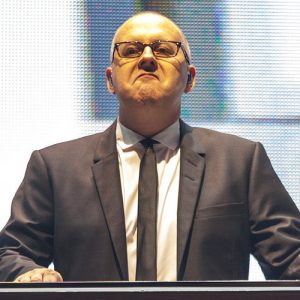 Sven Göran Fritzon, the baby of the band, was born on April 21st, 1962 in Åled (which is on the trail to Harplinge). It wasn’t until the age of thirteen that Fritte started with the piano and keyboards, and he hasn’t looked back since. He had calmed down a little since his days as “Mr. Hyperactive-Stage Dancer”, but got fired up again during “Återtåget ’96!”, when he once again played the synthesizer (“IT’S NOT A SYNTHESIZER!!! It’s an ORGAN!!!”) like a god, and then also during “GT25”.
After Gyllene’s 1985 break-up, Göran toured a few times and even wrote a song together with Per for Elisabeth Andreasson (“Stjärnhimmel”), but was never continually active in the music scene until Gyllene’s “Återtåget ’96!”. “I was never a musician; I was just a pop star…” said Fritte.

He had worked in Halmstad at Offset Repro as a printer/scanner, and was just about to start up his own printing “outfit” when MP called him with the news that there “might” be a Gyllene tour… He quit Offset (since they wouldn’t give him the six month leave of absence he requested), and started his own business, Fritzons Media, with all his money from Sweden’s most successful concert tour in history… That is until “GT25” came along and became even bigger!

Lately he rode his bicycle from Halmstad to Paris, France to collect money for charity.

Rumor has it that Göran’s big dream as a child was to be either an engineer or an Indian!
He was never formally educated at a music school (except for a “Totally worthless” organ course in Halmstad at Hagström’s Musikskola).
His best subjects in school were English and Math, while he could have done better in History…
He even plays a little guitar, but very few have been witness to it!
He has a son with wife Jenny, but has two children from a previous relationship. Fritte lives in a “castle” outside Oskarström.
Partied most of the guys during the heydays!
Fritte appeared as Roxette’s keyboardist in the TV-show “Gig” 1987.