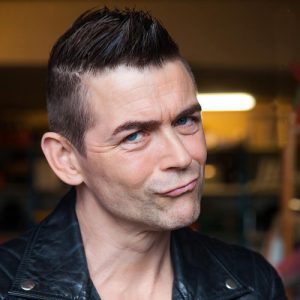 Anders Herrlin was born on September 17th, 1961, in Harplinge. Anders and Micke were childhood friends, and they often played the drums together. However, as their interest in music got stronger and they realized a band consisting of two drummers just wouldn’t cut it, they drew lots to see who would become the bassist; Anders won, and began to teach himself at the age of 15. According to Anders it was because he had bigger thumbs…
Anders has been terribly active in the business as well, as a musician, producer and engineer, working with Johnny Pilot, JaJaJa, Marie Fredriksson, Roxette and Carola (to name but a few).

Anders is nowadays residing in Stockholm running his own studio with some partners. 2002, he produced artist and girlfriend Jennie Löfgren’s solo debut and together with her he’s produced some of Mauro Scocco’s new songs.

Anders produced a song for Janet Jackson and is also responsible for a lot of the effects on Per’s “Mazarin.”
Anders is a leftie.
Developed Roxette’s sound together with Clarence Öfwerman.
Was a keyboard pioneer in Sweden, Anders made many Swedish famous acts start using synthesizers.
Wanted Gyllene to become more synthesizer oriented, Per said no.
As a child, Anders and younger brother, Magnus, used to spend hours birdwatching; nature and everything related to it has always been one of Anders’ biggest interests, something which has been passed down to his son Victor. (Magnus was a roadie for GT the first tours.)
Anders was voted “Best Looking Guy in Sweden” by Vecko-Revyn readers in 1981. (He hated that.)
Acke is a self professed computer freak (Mac).