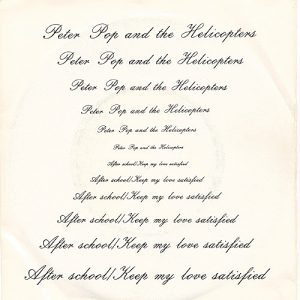 “After School” was the only single released by the hobby group Peter Pop & the Helicopters and it was planned to be released before Gyllene Tider’s breakthrough.

The songs were recorded at Studio 38 in Getinge in July 1979. Per and MP recorded this single just to show EMI that they surely didn’t need a big record company backing them! The members of the group were supposed to remain a secret, Per and MP posed with tin foil around their heads in the original picture, but the Swedish newspaper Expressen managed to reveal their identity in an article before the release of the single and therefore the sleeve was changed in the last minute.

Some remix versions exist of the songs, but have never been released.

And of course it’s a double A-sided single! 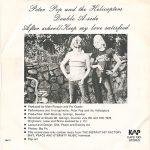