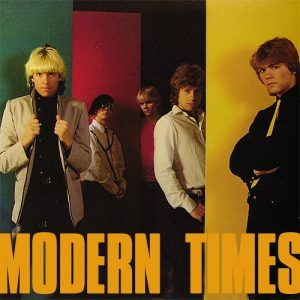 1. Fever in the Night (Ljudet av ett annat hjärta)
2. Breaking Up is Hard to Do
3. Girl in a Cole Porter-Song (Flickan i en Cole Porter-sång)
4. I Go to Pieces
5. Threnody
6. Excited (Upphetsad)
7. Been Lonely Too Long (På jakt efter liv)
8. Just Another Heartache (Vart tog alla vänner vägen?)
9. This Heart’s on Fire (Det hjärta som brinner)
10. When All the Lights Have Faded Away (När alla vännerna gått hem)

During 1981-’82 Gyllene Tider recorded 15 of their songs in English, upon a request (which included specifically “California Sun” and “I Go to Pieces”) from EMI USA. The thought was to send out an actual album with a real sleeve as a demo to EMIs around the world, to make a better impression rather than sending out a boring cassette. The album was however never printed. No sleeve exists either.

Ten songs made the cut although surprisingly not the requested song “California Sun.” Other songs recorded are “Buddy Holly,” “Beating Heart” (“När vi två blir en,”) “To Play With Fire” (“Leka med elden,”) “Summer City” (“Sommartider,”) and of course “California Sun” (“Tylö sun.”) Apart from the two songs on the “Beating Heart” single, “I Go to Pieces” from “Flickan i en Cole Porter-sång” and “Threnody” on the compilation album Radio Parlophone 2, these songs have never appeared anywhere. Some of the songs are totally re-recorded, while others are remixed overdubs. In 2019 “Beating Heart” and “To Play with Fire” were digitally released on the compilation Tidiga Tider. The first version of “Beating Heart” was a different version though, but that was rectified within days. “To Play with Fire” and “Beating Heart” were also included on Moderna Tider 40, but even there it’s the different version of “Beating”.